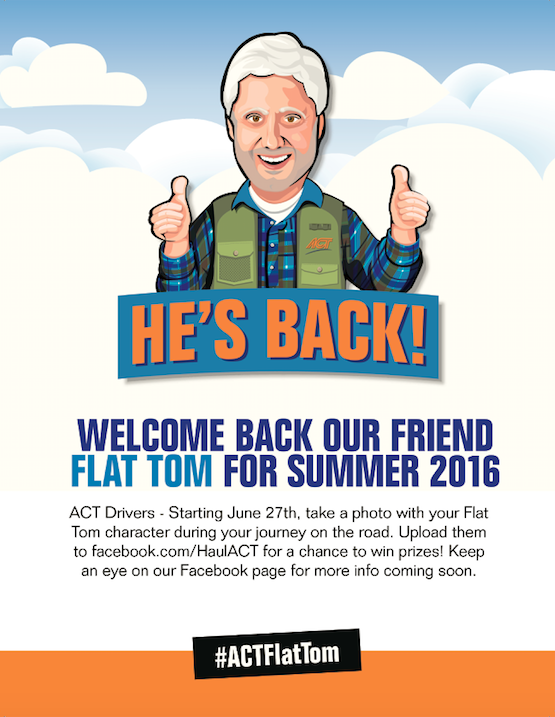 Are you an ACT driver and want to win freebies? Then you’re in luck! American Central Transport is excited to bring back Flat Tom this summer and give you the chance to win BIG.

Kicking off June 27, the #ACTFlatTom Facebook contest is a fun and easy contest for drivers to participate in, no matter where they are on the road. Here’s how it works.

Step 1.  ACT will provide a printed Flat Tom character to take with you over the road. OR click here to save the digital version.

Step 2.  From June 27, 2016 – July 29, 2016, take a photo with your Flat Tom character following the weekly categories below. (You don’t have to take a picture every week to qualify; it’s completely up to you how many times you want to enter!)

Step 3.  To submit your photo(s) for chances to win, go to facebook.com/HaulACT and upload your photo on the American Central Transport Facebook timeline. Be sure to comment which photo category you’re posting and use the hashtag #ACTFlatTom 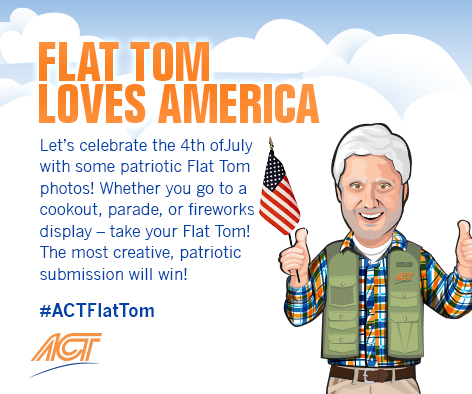 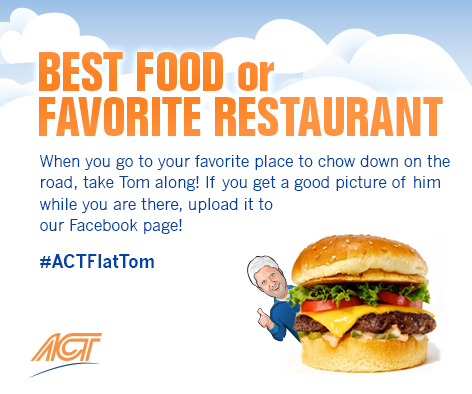 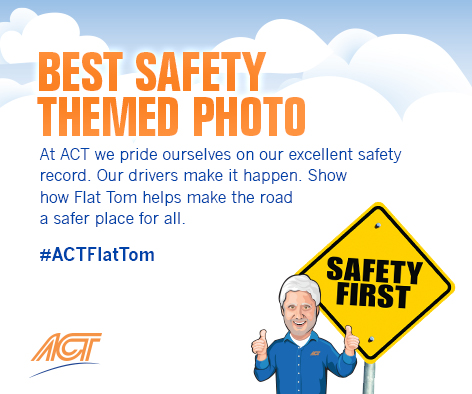 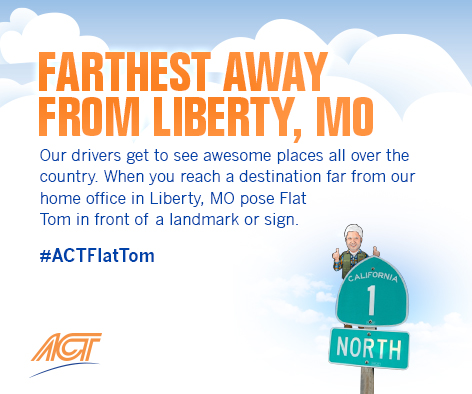 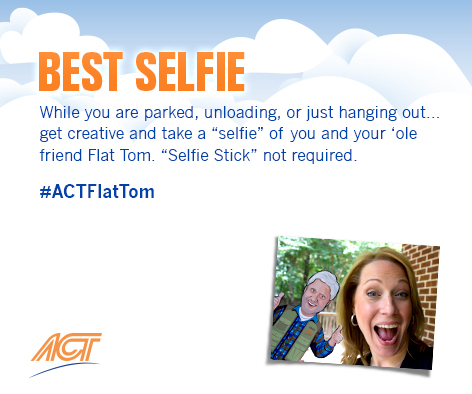 We’ll be giving away weekly prizes to participants throughout the summer. We’re looking forward to seeing your Flat Tom photos during your summer journeys on the road! While you’re at it, give us a follow on Twitter.

Please remember to only use your mobile device while parked. Good luck, ACT drivers! 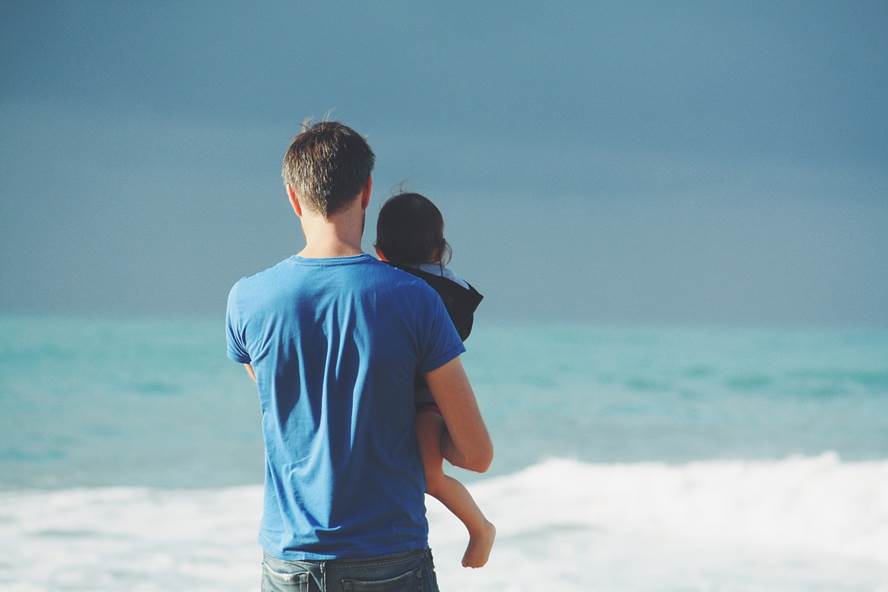 In 1998, I changed careers. I left the practice of law after many years and started a career in trucking. I was trained and experienced to “think like a lawyer.” It took a couple of years to temper that and learn to also think like a leader and businessman. Lawyers generally do not understand business. You see lawyers think differently than the rest of us. One can only acquire the ability to “think like a lawyer” by surviving three brutal years of law school and a tortuous bar examination. Practicing law develops this trait further.

Attorneys don’t think like normal people. We are risk adverse. We know that preventing a problem is much less expensive than the salvage job of fixing one. We can get paid by seeing an issue and then charging you to fix it. Rookie lawyers learn to document the file with “CYA” letters. We know how to spot an issue while conceiving the arguments we will make. We have a “thousand yard stare” and can anticipate events and what adversaries will argue. As a plaintiff’s attorney (yes, I admit it) I had the luxury of 20/20 hindsight in zealously representing an injured client. The ability to inflame a jury makes the verdict higher. I understand that if a bad accident occurs, God forbid, that regardless of fault I will be vilified before a jury in the barrister’s attempt to collect a lucrative contingency fee. The nicest thing about it is that people actually see value in your opinion. After all, clients need help and are paying you for it. In the sixteen century, Shakespeare noted, “O’er lawyers’ fingers, who straight dream on fees.”

I grew up on a farm in Roosterville, Missouri outside of Liberty, in a much different world. Being the oldest of eight, my mother was much too preoccupied to pay much attention to what I was doing. Cars didn’t have seatbelts, much less head rests, and airbags. Car seats were unheard of. In the summer my brothers and I would escape the heat of the unconditioned farmhouse. The computers and video games which occupy most young men’s lives didn’t exist. There were no cell phones. We found adventure on the farm, exploring, fishing, shooting squirrels with 22’s and ice skating on farm ponds in the winter. At first we skipped over dusty farm roads. When we learned to ride bicycles our explorations expanded to 10 mile radius on 65 mile per hour farm roads without shoulders. At the ripe old age of ten, I learned to drive a small farm tractor and one of our joys was piling a brother on each fender and driving it to the general store to select prizes from the candy rack. When we learned to ride horses, our territory of adventure expanded even further. The only protection from risk was a little luck and a female collie named Kip who followed and mothered us wherever our adventures led. When thirsty we drank out of a pond or spring in the hillside. During school we walked to a bus stop lean to. Kip always followed. If it was raining we wore boots, raincoats and hats. In the winter we were bundled up.

Today I live in a nice subdivision on a cul-de-sac. As we get older routines set in. One of mine is that every morning I drive to the local Starbucks and get coffee for my wife and myself. During school, I have a hard time getting back to my garage, as the entrance to my street contains a traffic jam of helicopter moms, waiting in their SUVs’ with their children for the bus. For most of them the journey to the bus stop is four blocks or less. Now a tone deaf urban President proposes to ban farm kids from working on the farm before they’re sixteen. Many truckers’ children spend their summers inside an air conditioned house playing video games or listening to their iPods. Mom tries to intervene but she is often alone. Dad is on the road.

Yes, a much different world. Business is not so simple. Life in general and business in particular (trucking, certainly) is full of risks. The only way to eliminate risks is to park all the trucks. But then, there would be no jobs and no business. So you learn to weigh and manage risks. It’s not easy. Listen to today’s political rhetoric. Everything bad that happens to someone is someone else’s fault. As a society we have forgotten that sometimes bad things happen in lives which are no one’s fault; and sometimes, it’s your own damn fault. But societal attitudes demand a remedy. Everyone is a victim.

It is against this backdrop that business leaders have to make tough decisions. If you seat a driver with a record of alcohol or drugs, plaintiffs’ lawyers will crucify you. If you don’t, the EEOC will come after you for discriminating against the disabled. The EEOC bows their back if you perform criminal background checks; have a medical examination done before making a “condition job offer,” or discriminate against people who are overweight through a sleep apnea program. All the while, plaintiffs’ lawyers are scanning the internet for accidents involving trucks, soliciting the injured and trying to find one technicality for any flaw in your hiring process.

Last summer a driver approached me with a question. “Mr. Tom,” he asked in his southern style, “Why don’t you allow drivers to take their kids with them in the summer when they are out of school?” The issue was in play. We examined it exhaustively. Our age cut off for our rider policy was 16. He wanted to take his fifth grader. What if the driver has a wreck and his son or daughter is hurt? What could be more horrible than an injured child? Will the child be a distraction? What are the car seat laws in all of the states we run? Some have an age limit for car seats and some are based on the child’s weight. How do we know they will strap the child in? “But, Mr. Tom, I love my son. His mom needs a break. He is out of school in the summer. I’d never do anything to put him in danger. I don’t get to spend much time with him and he needs a male role model in his life. I miss him. He is so excited.” How would the lawyer respond? How would the businessman respond? How would a caring person reply?

What is the right thing to do? If you agree to the proposal you are taking a risk. If you refuse, you eliminate this particular one risk. The law doesn’t reward you for doing the right thing.  It punishes you for bad decisions.

But what will this young man do growing up without his father? Watch television, cruise the internet, and listen to the bad influences in music? How will he learn to be a man? What other hardships can we reap on a family with an absentee parent? How do you balance the risks? Our drivers are seasoned, experienced professionals. Not a day goes by that some parent is hanging in their blind spots, talking on the cell phone with children crying in back. They navigate around SUV’s that pull in front of them suddenly and then put on brakes. And, yet, our drivers are amazingly safe.

I remembered my favorite times with my father; when he took me to his office on the upper floor of his downtown Kansas City skyscraper to look down on the American Royal parade; or when he took me with him on business to Washington, D.C. We spent a couple extra days seeing all the sites. I remember the nights before, staying awake with excitement and dreaming of new adventures. I remember being on an airplane for the first time. I was special because I had time alone with him. I recall the amazement of different worlds seemingly far from the farm.

I thought about our passenger policy. The child would certainly learn a lot about trucks and safety. He would hold his head high if bullies taunt him saying “Your dad is just a truck driver.” He would gain quality time with his father. He would learn about the industry and what his father does for a living. He will go home with lifetime memories. Surely, these folks who drive with their children at home can spend a couple weeks with a member of their family on the road. We are so risk adverse that in many ways the industry has already dehumanized a tough job of a truck driver. Driving a truck over the road carries with it for many the occupational hazard of divorce. Many truck drivers are not around to lend that guiding hand to their children. The spouse at home assumes the duties of two parents. We modified our policy.

I forgot about this dilemma until last week. I was working in my office when an independent contractor, Lee, knocked on my door to introduce me to his son, Jake. A few hours later, another contractor, Pat, introduced me to his son, Luke. The young men were smiling from ear to ear as their proud fathers looked on with pride. Pat and Luke were both wearing the same shoes with shoe laces the color of ACT orange.

Later that day, I had a look on Facebook and noticed the boys sending messages home to mom about their adventure. I saw Luke working with his dad in a trailer and learning how to be a man. Lastly, I saw the happy expressions in front of a plate of fries and a Freddy’s hot dog. I have lived their adventures vicariously. Is it a risk to allow this, or is it a risk to forbid it? Perhaps, we should learn more than being a good businessman. Perhaps…we should learn to be fellow human beings. 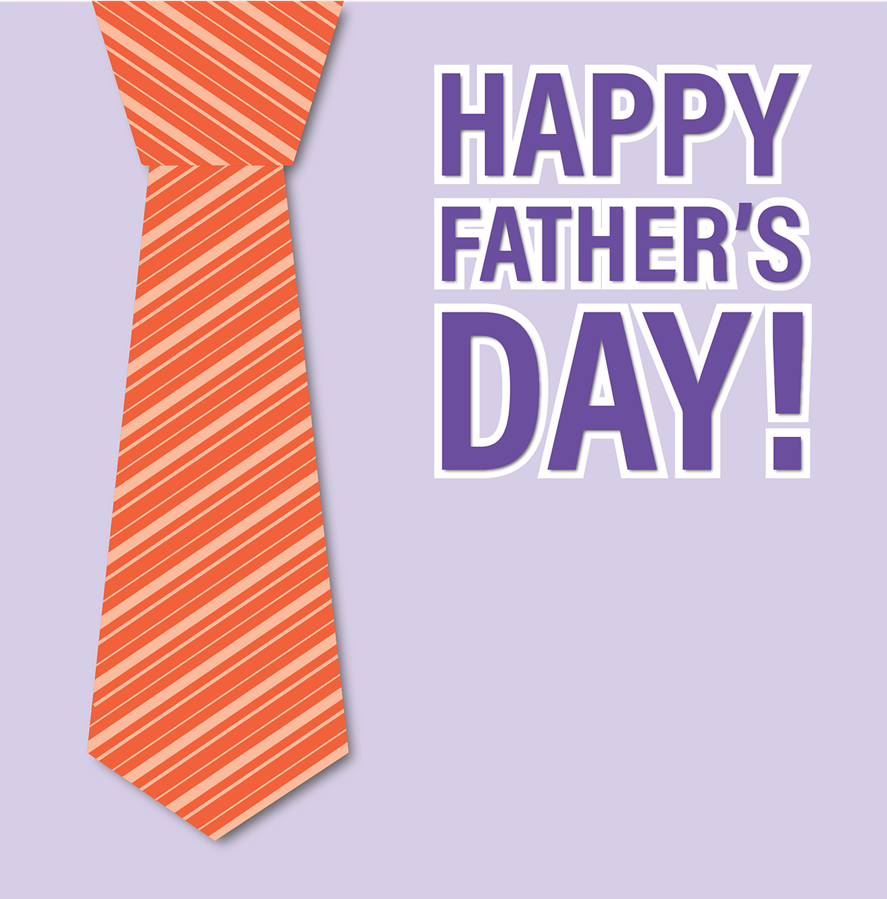