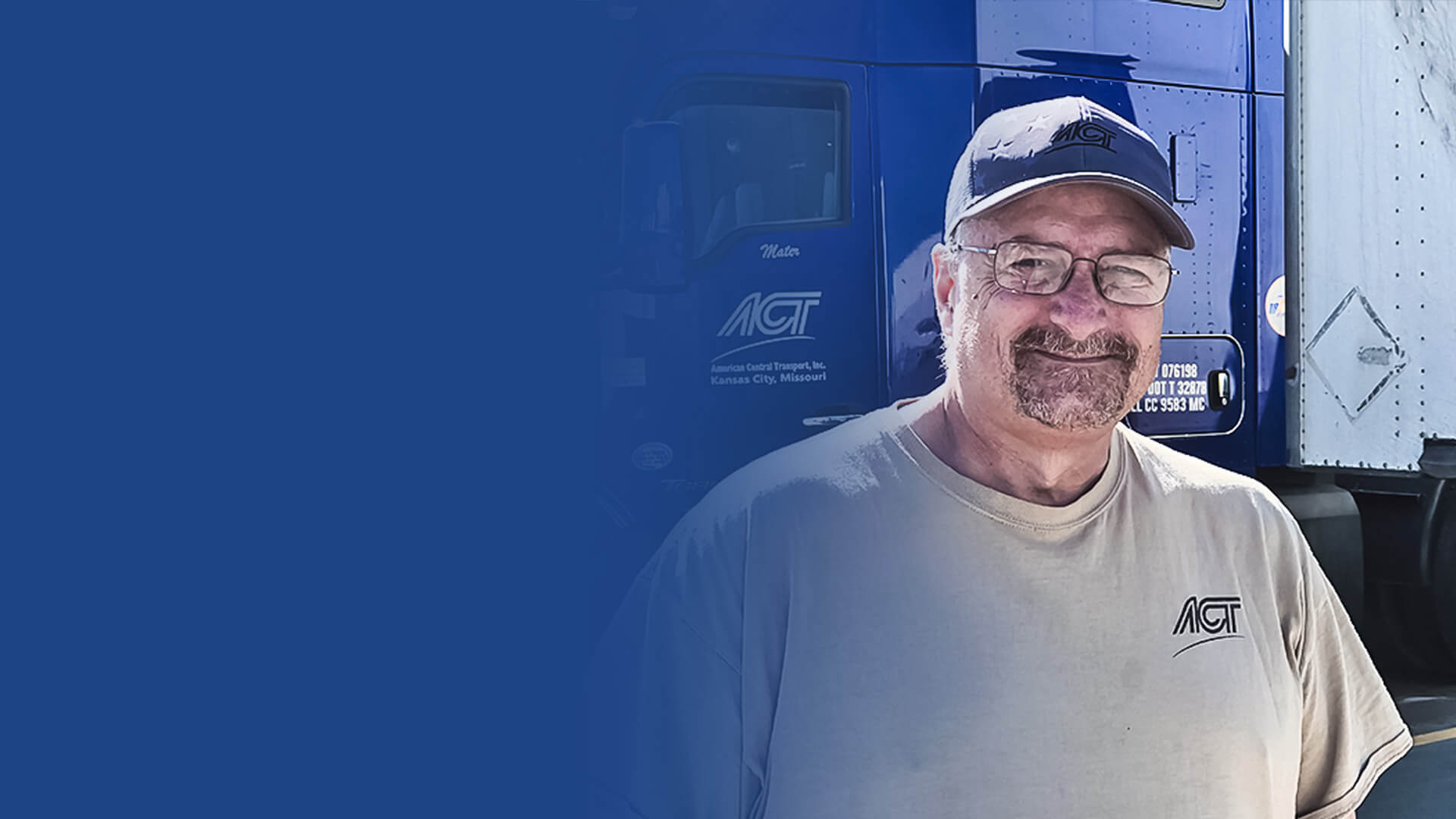 “THE ONLY COMPANY THAT HAS REALLY TREATED ME LIKE FAMILY, IS THIS COMPANY.” 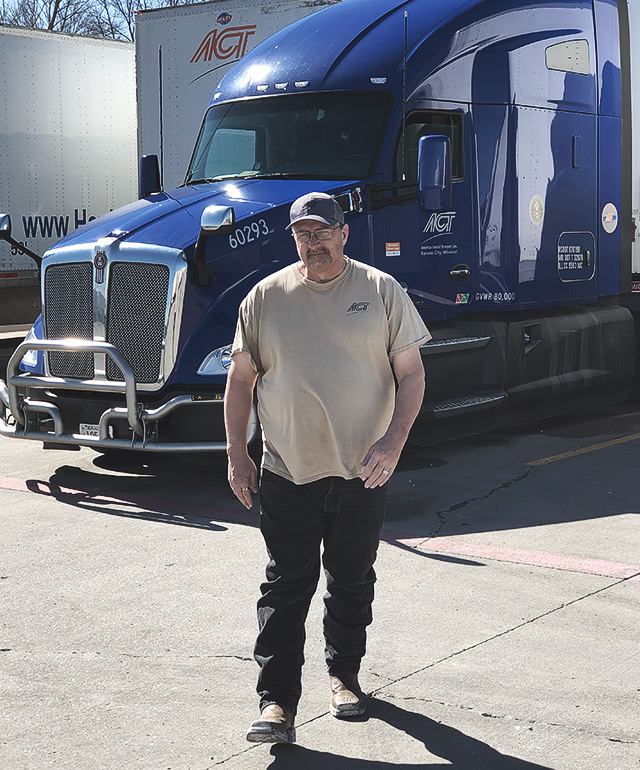 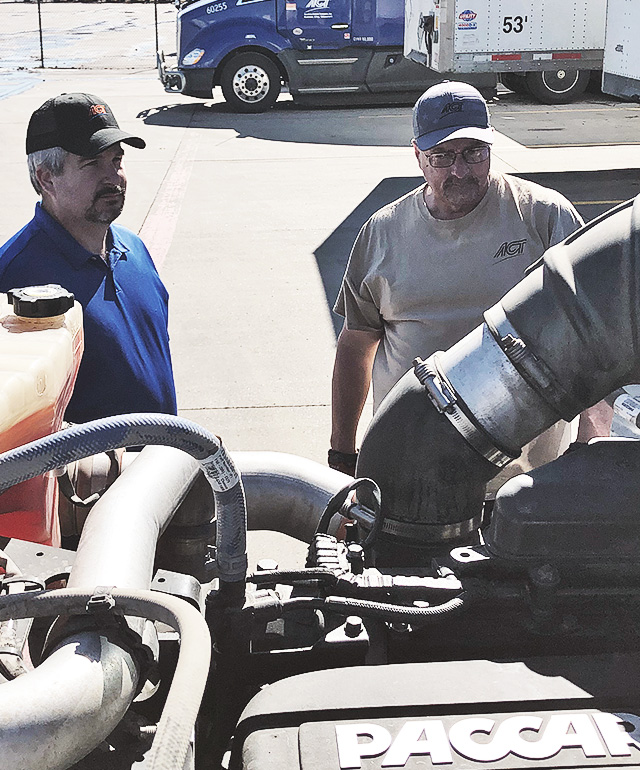 HOW DID YOU GET INTO TRUCK DRIVING?

I've been driving, pretty much on a steady basis for the past 30 years. My stepdad was a truck driver and when I was younger, I used to ride with him on the road. I think I must have gotten trucking in my blood early on. I got a little older. I joined the military. I was in the Army, and they told me I had to decide between truck driving and plumbing. Well, the recruiter talked me into becoming a plumber so I ended up helping maintain a campground. Even so, I still got to drive. Our group was something like a construction engineer company. I got to drive dump trucks and that type of equipment. I was still able to get experience driving, before I got out of active duty and went to school. Before I really got back behind the wheel of the big trucks.

When I got out of active duty and moved back home to Wisconsin, my brother and I tried our hand in a construction business but it was never really in my blood like trucking is. So, that's when I realized that I like to be more on my own, and I decided to get back into trucking and get back the kind of the freedom you have on the road.

WHAT KIND OF TRUCKING EXPERIENCE HAVE YOU HAD?

After I got out of active duty military and after running a construction company, I went to a driving school up in Green Bay, Wisconsin, for a national carrier, one of the big ones. Ever since I graduated, I've been driving. There was a time there where I had my own truck, for a while, until the economy got kind of rough on owner-operators. I decided to sell my truck around 2012, and go back to being a company driver. This led to dispatching trucks for a bit and then back to driving, this time for one of the major building supply chains as a delivery driver.

While I was working delivery for a building supply chain and moving heavy appliances in and out of houses, I started looking around for something more along the lines of just driving, without the heavy loading. I had some medical issues come up and I needed something that would be less strenuous than loading and unloading 400+ lbs. appliances. I started looking around for other opportunities.

I didn't even know about ACT until I noticed that they were the carrier who brought the freight to our store, a warehouse in Rockford. So that's how I found out about ACT. I started researching ACT. I’d seen their trailers and their trucks, and wanted to find out more. I found out that their routes tend to be around the Midwest area. They didn't do any Northeast. They didn't go any further west than Denver. After all these years of driving, I kind of figured I deserved to work for a company like ACT that stays in the areas that I enjoyed going. That’s what got me started researching and talking to them about working for them.

ACT did it for me, due to the simple fact that a majority of the companies that I'd talked to were still kind of a go all-over-the-place, all over the country type of companies. I didn't really want to do that. I had been off the road for about four or five years, working locally. A majority of companies wanted me to go get experience somewhere else, even though I had years and years of experience. When I talked to ACT, they wanted me to go out with a trainer. I had a hard time with that, because I didn't want some young trainer who's only been driving for five or ten years, to tell me how to drive a truck. They talked me into training with one of their old timers, and he's older than me, and has been driving longer than me, a real nice guy. I ended up with him for two weeks. I figure every company wants to emphasize their way of operating and I realized it’s procedure.

WHAT WAS IT LIKE WHEN YOU GOT TO ACT?

When I walked into the office, everyone had a friendly smile and a friendly face. Once they meet you and get to know you, they recognize you, even the upper management asks how you’re doing, what you’re up to, where you heading, stuff like that. I'm a big baseball fan, a big Cubs fan. One of the upper manager guys is a Cardinals fan, another upper management, he's a Reds fan. So, we're all in the same division. I'm always wearing something that says Cubs on it whenever I go into the office. They get surprised whenever I’m in the office and I'm not wearing something that says Cubs on it.

HOW DID YOU DECIDE TO BECOME A TRAINER?

Well actually, Josh, the head of recruiting, started talking to me about it quite a while back. At one of our driver appreciation events he was like, "Well, I think with your military background and your personality, I think you would be an excellent trainer. “I was hesitant about it.

Josh kept talking to me and I think it took pretty close to a year before I finally decided that I would become a trainer. The funny thing is that I was trying to make a deal with him. My truck had an old automatic 10-speed, and I knew we had gotten these new 12-speeds.

The deal I wanted to make was that I would become a trainer if he got me a new truck with 12-speed. I really didn't want to train in the 10-speeds, because they were a lot harder to control, especially when you're backing up and stuff. Well, the funny thing is, I mean, it's not funny for the company, but I was parked at a truck stop in Topeka, Kansas. Bright and early one morning, some driver with an oversized load, well, I guess he didn't set his break. His rig backed into the side of my old truck. I was sound asleep and it scared the heck out of me. After you’ve done a tour in Iraq, loud noises like that can really get your attention.

Well, he pretty much wiped out the whole driver's side of my old truck. They towed me back to Kansas City, and they were going to give me a temporary truck until they redid my old truck. The guy in charge of the maintenance department said, "Nah, let's just go ahead and give them a new truck." So, it ended up working out. I got a new truck. I told Josh, " I'll go ahead and be a trainer for a while." I took the trainer class and here I am, a trainer.

Training is going well. And, as far as I know, they're all still working for ACT. I watch what they're doing, and of course their driving skills. On the open highway, it’s usually easier. The harder part is when we are in a town. When they have to do their backups, I can get out and watch and make sure they do a good job with it. I’m actually enjoying it. I won’t deny it, as a trainer, the pay is good too. It’s like two weeks of being chauffeured around.

WHAT DO YOU WANT TO TELL OTHER DRIVERS ABOUT THIS COMPANY?

I've never had another company call me on my birthday and just wish me a happy birthday. To my recollection, the only company that has really treated me like family, is this company. The miles are there. I do enjoy being able to stay in the areas I want to drive. This is one of the best companies to come work for. Especially if you, like I did, want to work for a company that doesn't go to the Northeast or out West. I believe ACT takes time and pride in making sure everybody is happy, and that our new students are getting the proper training.

You know, taking pride in the job is important to me. I think over the years, some of that pride has been lost. And I think we need to bring it back with this new generation of drivers. I enjoy training these drivers, helping them get their foot in the door, being safe and courteous and efficient. I’ve got that opportunity here. I'm not going to leave ACT unless I decide to retire from trucking all together.