Archive for the ‘Blog’ Category

With driver pay increasing over the year, see what ACT is doing to stay ahead of the game. Read More Here.

(KANSAS CITY, MO) — American Central Transport (ACT) has been named one of the nation’s 2018 Best Fleets To Drive For by CarriersEdge in partnership with The Truckload Carriers Association (TCA).

The Best Fleets To Drive For designation is an annual survey and independent evaluation that recognizes the top 20 U. S. for-hire carriers that provide the best workplaces for their drivers.

“ACT has made significant investments in driver programs and those efforts are delivering unmistakable results,” said Mark Murrell of CarriersEdge. “Driver satisfaction at the company is over 95%!”

“This is a validation of all that we have worked toward for years,” said Phil Wilt, ACT’s President and COO. “Our goal has always been to be the company that pays better, treats its drivers better, and provides a workplace that truly does live up to our core values of safety, integrity, respect, accountability and family.”

ACT successfully passed through a four-stage evaluation to be eligible to compete for this award. The company first had to be nominated by a current company driver or independent contractor. Next, the company completed evaluation and interview phases that looked at its company programs & policies, safety performance, career path opportunities as well as their total pay package, health benefits, driver satisfaction, and other factors. Finally, ACT drivers gave feedback on their company through an independent driver survey.

American Central Transport, Inc. is a dry van truckload carrier serving major shippers throughout the eastern half of the United States. Founded in 1926 as E.K. Motor Service, the company was later renamed after it was purchased by the Kretsinger family, who still run it today. ACT has been frequently recognized for its quality and premium service, signified by its “Raising the Standard” motto.

See what Fleet Owner had to say about our Pay Increase! Read Here.

American Central Transport (ACT) has announced that it will be increasing both contractor and company driver pay this month, as well as implementing a new bonus incentive for company drivers.

Effective February 28th, ACT contractors will be paid an additional $ 0.02 cents per mile. ACT company drivers will receive an across­-the-­board pay raise, and will be eligible for up to a $500 monthly bonus as part of ACT’s new “Drive Your Pay” bonus plan. Detention pay will be paid at $20 per hour for all qualifying loads.

“Our freight demand has increased and this has allowed us to offer these major boosts to our pay package,” said Phil Wilt, ACT’s president and COO. “We’re implementing the new bonus plan to reward our company drivers for the miles they drive. Every month, company drivers will earn a bonus of $150 once they have driven 9,000 miles, and the bonus amounts will increase with each thousand miles they drive, up to a monthly payment of $500 for 12,000 miles driven.”

“We strive every day to provide the best freight, top pay, strong benefits and a culture that values our drivers,” Wilt said. “We pledge to continue to monitor our driver pay programs and to remain an industry leader in our total compensation package.”

American Central Transport, Inc. is a dry van truckload carrier serving major shippers throughout the eastern half of the United States. Founded in 1926 as E.K. Motor Service, the company was later renamed after it was purchased by the Kretsinger family, who still run it today. ACT has been frequently recognized for its quality and premium service, signified by its “Raising the Standard” motto.

See what we are doing to keep our drivers and other drivers safe on the road. Read More Here!

ACT Focuses on Truck Driver Safety and Appreciation This Week 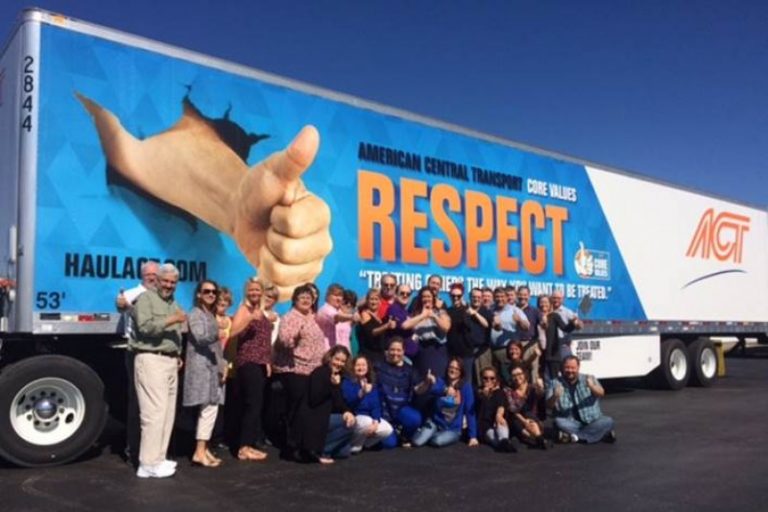 Join American Central Transport in the fight to Strike Out ALS! ACT is teaming up with The ALS Association Mid-America Chapter to help make a difference — and there are a lot of ways you can get involved! 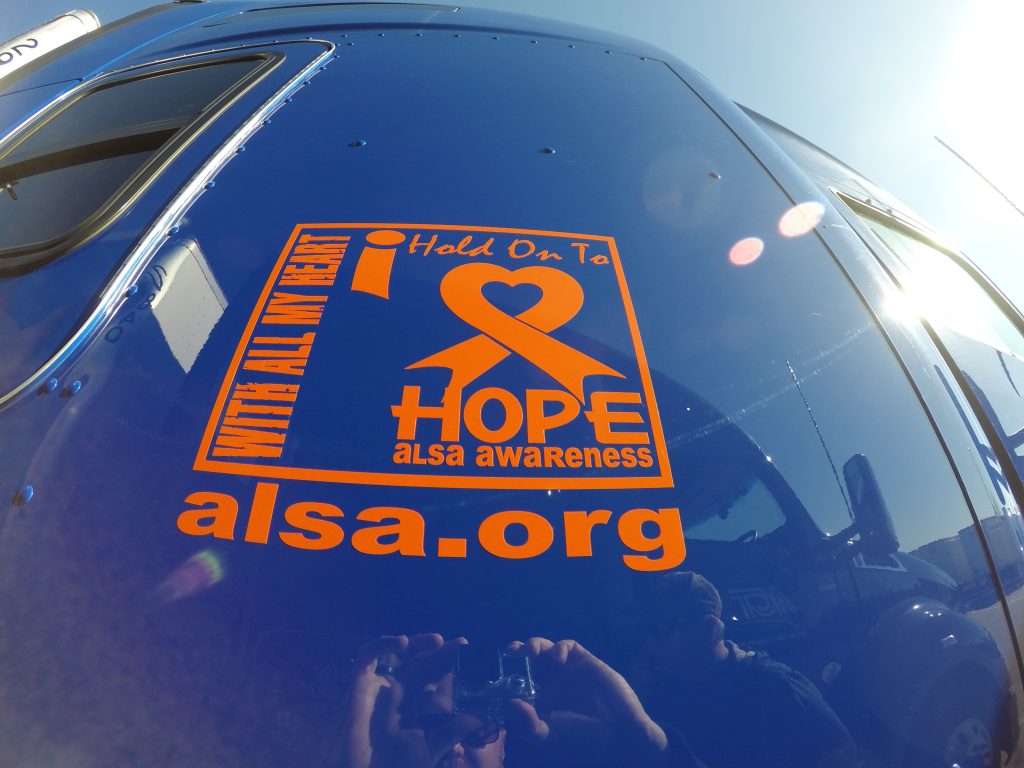 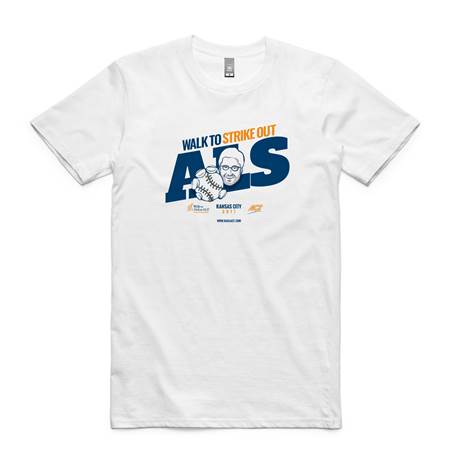 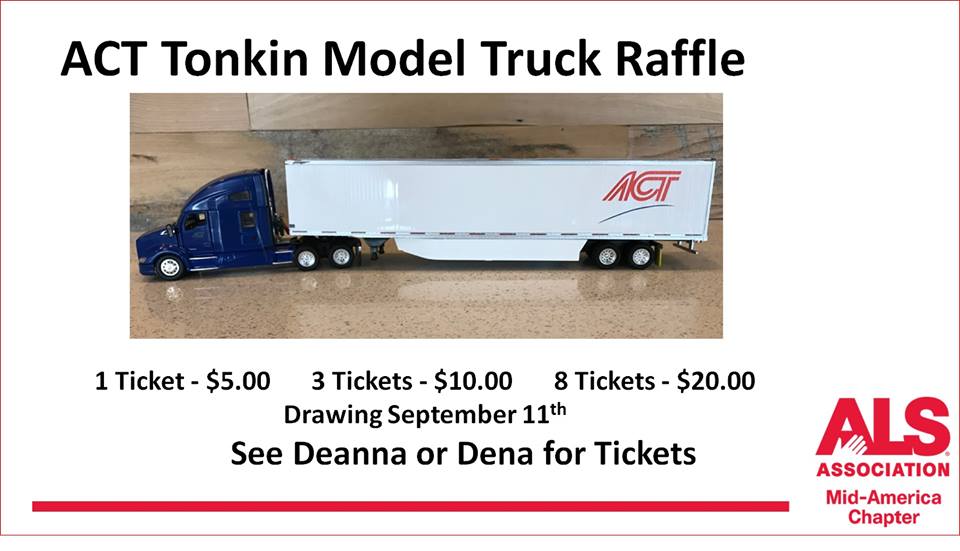 Be a Fundraising Walker: On September 16th in Kansas City, Missouri, ACT invites you to join us in the annual Walk to Defeat ALS® fundraising event. The one-mile noncompetitive walk is a great opportunity bring hope, raise money to support those in the community with ALS, and spread awareness to find a cure.

Be a Virtual Walker: Can’t make it to the walk? Be with us in spirit and donate to ALS for Tom or to Team ACT:  http://bit.ly/TeamACTWalk

Check out this slideshow from the 2016 Walk:

Every drops adds up, and your efforts—small or large—make a difference. Join Team ACT and help us Strike Out ALS! Thank you for your support.

American Central Transport in the Community 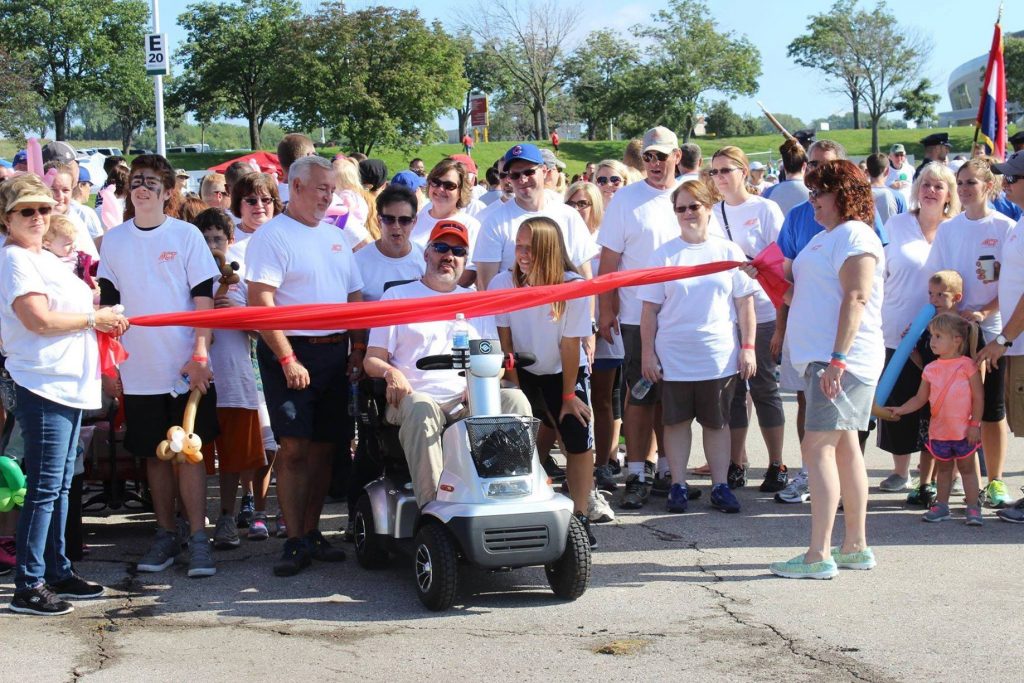 Walk to Defeat ALS® in September 2016

American Central Transport wouldn’t be where it is today without the support of our drivers, employees, their families, and the numerous groups and organizations we’ve partnered with over the years. To show our appreciation, we’re proud to give back to the community—in particular, ACT recently teamed up with the ALS Association Mid-America Chapter and Harvesters, a Community Food Network in Kansas City.

In September 2016, ACT participated in Walk to Defeat ALS®. The one-mile noncompetitive walk was a great opportunity for Team ACT and the community to come together in the fight against ALS. We are pleased to announce that through all efforts in raising funds and awareness for ALS, Team ACT raised $24,355.19 for The ALS Association Mid-America Chapter. All proceeds went to support those battling this disease as well as research to finding a cure.

If you would like to get involved in bringing hope and raising awareness to ALS, visit www.alsa.org

Give Food, Give Hope

ACT recently donated 1,110 lbs. of food and provided 926 meals to Harvesters, a regional food bank serving a 26-county area of northwestern Missouri and northeastern Kansas. Meal donations are an important source of their most needed items, as Harvesters provides food and related household products to more than 620 not-for-profit agencies including emergency food pantries, community kitchens, homeless shelters, children’s homes and others.

If you’re interested in making a difference by donating food to Harvesters, visit harvesters.org/give-food

ACT looks forward to continuing our community involvement efforts and we thank everyone for their support! Learn more about our trucking company at HaulACT.com and see what we’re up to on Facebook. 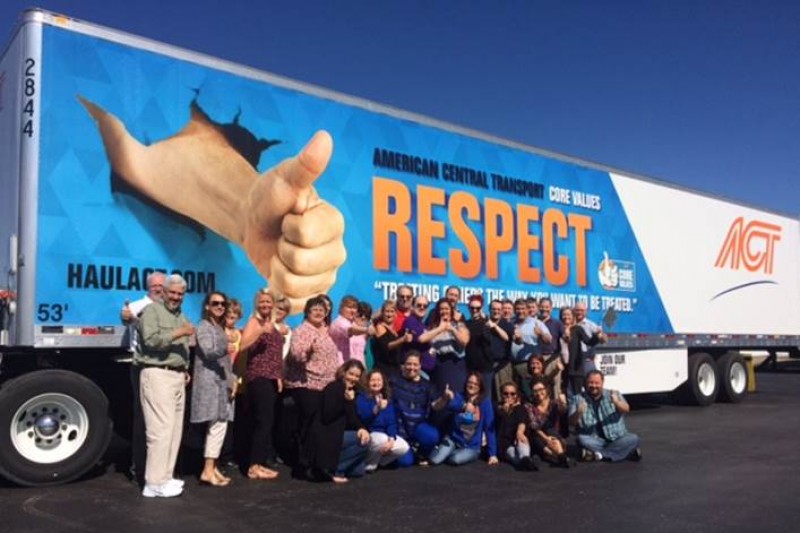 American Central Transport is teaming up with The ALS Association Mid-America Chapter and encourage you to join us in the fight against ALS. We want to help bring awareness, raise funds for research, and helps those affected by ALS. If you’d like to get involved, we have several opportunities!

We recently launched a GoFundMe page to raise funds to battle this disease. By making a donation through GoFundMe, you can receive a custom decal for your truck or personal vehicle. For a $25.00 donation, choose from either Blue or Silver. For a $30.00 donation, choose your own custom color! (You can donate any amount you’d like). Check with Josh in ACT Recruiting if you have any questions about your donation or decal colors. Take a look at the preview below: 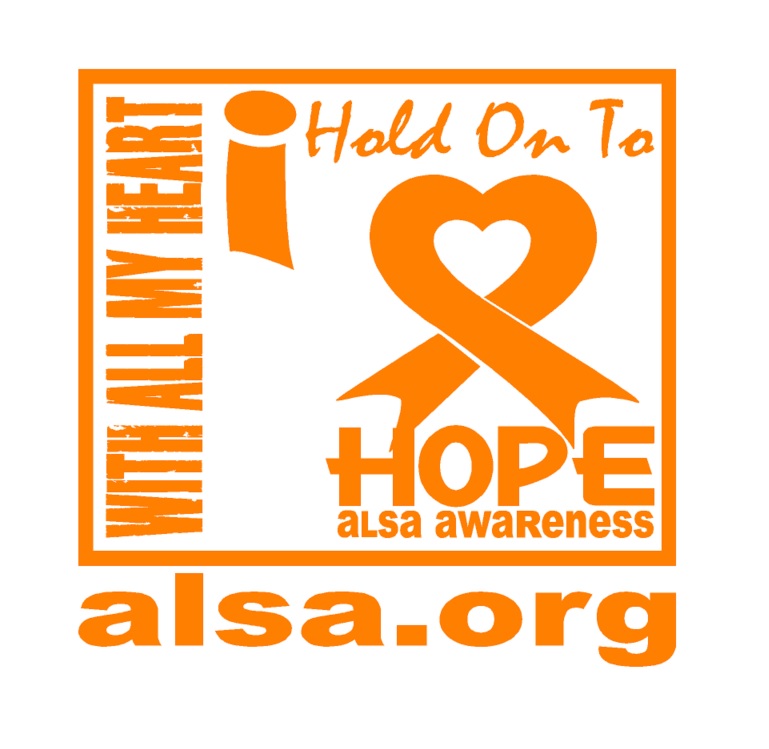 On August 24, ACT will host a breakfast at our office in Liberty, MO to raise money for The ALS Association. We will be announcing the winner of our St. Louis Getaway Package! Starting Monday, August 15, you can purchase a raffle ticket for $1.00 each, or 6 for $5.00. The winner will receive a one night stay at the Parkway Hotel in St. Louis, $100.00 to McCormick and Schmidts, two Cardinals tickets (some restrictions apply), two City Museum passes, two St. Louis Arch Passes, a $50.00 Llywelyns Pub Gift Certificate, and a $50.00 Card from Casey’s! See any member of the event committee for tickets – De, Brook, Mendy, Casie, Kerri, Phil or Dave Warner. All money raised will go to The ALS Association.

Finally, on September 17, ACT will be participating in Walk to Defeat ALS®. The one-mile noncompetitive walk will take place at Arrowhead Stadium in Kansas City. It will be a great opportunity bring hope, raise money to support people in the community with ALS and spread awareness of the urgency to find a cure. Join Team ACT here. 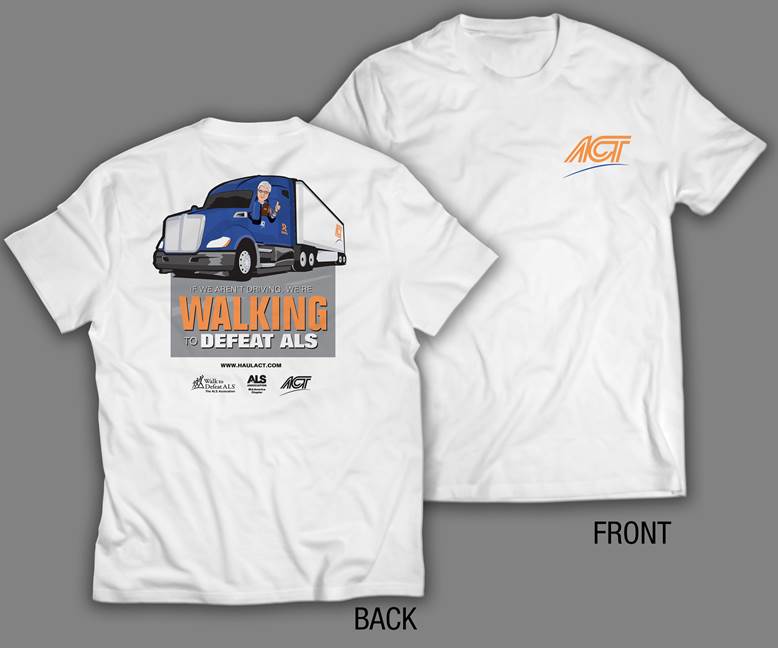 Our “Walk to Defeat ALS” t-shirts

Together we can make a difference in the lives of those affected by Lou Gehrig’s Disease. Thank you for your support! Follow our journey on the ACT Facebook Page and share your story with us.